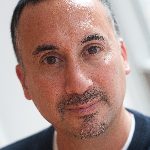 Doug Elkins is a two-time New York Dance and Performance (BESSIE) Award-winning choreographer who began his career as a B-Boy, touring the world with break-dance groups New York Dance Express and Magnificent Force, among others. He has created over forty original dances during his career for Doug Elkins Dance Company (1988–2003), doug elkins choreography, etc., and a number of university and professional companies. Until March 2012, he taught at The Beacon School on the Upper West Side of Manhattan where his tenure was the subject of Where the Dance Is, a short film by Marta Renzi. He is a graduate of SUNY/Purchase and Hollins University/ADF (M.F.A., 2007). Calendar 2012 will bring the New York preview of Mo(or)town/Redux at 92Y Harkness Dance Festival (March 2-4) and world premiere at American Dance Institute/ADI in Rockville, Maryland (May 5-6). Doug will also be choreographing The Taming of the Shrew, directed by Arin Arbus, for Theatre for a New Audience (March 17-April 21 at The Duke on 42nd Street); and continue his collaboration with theater director Anne Kauffman while in residence at Joyce SoHo. The critically acclaimed Doug Elkins & Friends’ Fraulein Maria, a loving deconstruction of The Sound of Music set to the movie soundtrack by Rodgers & Hammerstein, will resume touring this summer including encore presentations at American Dance Festival, The Yard on Martha’s Vineyard, and Jacob’s Pillow.