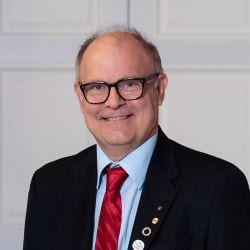 Doug Stephan is a world-leading researcher in inorganic chemistry and catalysis. While he developed commercially successful catalysts for olefin polymerization 25 years ago, he is best known for his more recent articulation and the subsequent development of the concept of “frustrated Lewis pairs (FLP)”. Stephan's work has illuminated new avenues to metal-free catalysis and the development of main group catalysts for a myriad of organic reactions. The author of over 500 scientific articles, his work has garnered much attention and he has been an ISI highly cited researcher for the past 6 years. Stephan's work has been recognized with a number of National and International awards. He is a Fellow of the Royal Society of Canada (2005), a Fellow of the Royal Society (London) (2013) and a Corresponding Member of North-Rhein-Westfaelia Academy of the Sciences and Arts (Germany) (2014) and has been a Killam Fellow (2011), Humboldt senior award winner (2002, 2011) and Einstein Visiting Professor (2016-2019) and a J.C. Polanyi Awardee (2019). Research Group Photo Credit: Anne-Marie Brisson, Rideau Hall