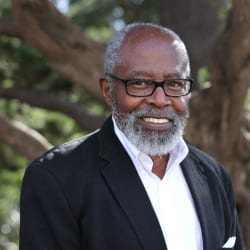 His most recent book, To See the Earth Before the End of the World, published by Wesleyan, was a finalist for the 2010 LA Times Book Award and was one of two runners-up for the 2011 Kingsley-Tufts Award. The New Wing of the Labyrinth (2009) was published by Singing Horse Press and City Eclogue was published in the Atelos series (2006, No. 23). His collection, Voices Cast Out to Talk Us In, won the Iowa Poetry Prize; Atmosphere Condition was a winner of the National Poetry Series and was nominated for the Academy of American Poets’ Lenore Marshall Award.

Roberson is a recipient of the Lila Wallace Writers’ Award and the Poetry Society of America’s Shelley Memorial Award. In 2011, he received the Stephen Henderson Critics’ Award for achievement in poetry by the African American Literary and Culture Society at the American Literature Association Conference. He recently received the 2016 PEN Voelcker Award for poetry.

Ed Roberson graduated from the University of Pittsburgh in 1970, where, as an undergraduate research assistant in limnology, he traveled across Canada, through Alaska, Kodiak and Afognak Islands and later Bermuda with research expeditions. As a member of the Explorer’s Club of Pittsburgh, he climbed mountains in the Peruvian and Ecuadorian Andes. Ed worked in the steel mills, as an aquarium diver-tankman at the Pittsburgh Aquazoo, and in advertising graphics. He motorcycled across the U.S. and has traveled in West Africa, Mexico, the Caribbean, and South America.