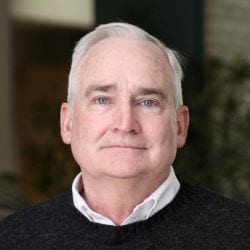 Edmund Russell grew up on the Great Plains, where his family has lived for five generations. He followed an unconventional route from a small town on the Kansas prairie to his current position as a professor of history.

The Carnegie Corporation helped launch Russell on his journey by funding a library in Great Bend, Kansas. That library helped a young Russell develop a passion for learning. He toured the world, without leaving Great Bend, by reading books. A scholarship enabled Russell to attend Stanford University, where he majored in English. Wanting to do some good in the world after graduation, Russell went to the Philippines to work for two years as a volunteer development journalist. That experience sparked an interest in sustainable agriculture.

Convinced that agriculture should be modeled on natural ecosystems, Russell decided to earn a Ph.D. in ecology. He had studied little science as an undergraduate, so he spent two years working in the president’s office at Stanford while taking courses in chemistry, physics, and biology. Then he enrolled in the Ph.D. program in biology at the University of Michigan. After starting a dissertation on rice agroecosystems in the Philippines, Russell found himself wondering why we developed unsustainable agriculture in the first place. With the support of his advisors, he switched topics and studied the history of pesticides as a case study of unsustainable agriculture. In the dissertation, which later appeared as a book (War and Nature), he argued that chemical warfare accelerated the growth and promotion of insecticides (and vice versa). War and Nature and a book Russell co-edited (Natural Enemy, Natural Ally) helped establish the environmental history of war as a topic of study.

While writing a history dissertation in a biology department, Russell decided to forge a career in environmental history and history of technology. For his second major project, Russell encouraged historians and biologists to join hands to study the role of human-caused evolution in history. In contrast to those who argue that genes determine history, Russell believes that social forces have led people to shape the traits populations of non-human species in specific ways. Those changes in non-human populations, in turn, have circled back to shape human culture. Russell developed a broad version of this argument in Evolutionary History. He complemented that book with an in-depth case study, human-greyhound coevolution, in Greyhound Nation.

Now Russell is working on an environmental history of capitalism and technology. He is writing the first scholarly book on the transcontinental telegraph, which crossed the American West in 1861. With the assistance of a Guggenheim Fellowship, Russell will spend academic year 2019-2020 working on this project at the Huntington Library in San Marino, California, where he will be the Dibner Distinguished Fellow in the History of Science and Technology.

Russell’s research has won prizes in three fields (environmental history, history of technology, and history of science) and a National Science Foundation CAREER Award. His teaching has won three prizes, including a statewide award. He has been a visiting scholar at Cambridge University, the Rachel Carson Center in Munich, and the University of Colorado. He has served as vice president for research of the American Historical Association and will become president of the American Society for Environmental History in April 2019.

Russell taught at the University of Virginia, University of Kansas (where he was the Joyce and Elizabeth Hall Distinguished Professor of American History), and Boston University before taking his current position as professor of history at Carnegie Mellon—a university founded by the same man, Andrew Carnegie, whose fortune funded the library in Great Bend, Kansas.