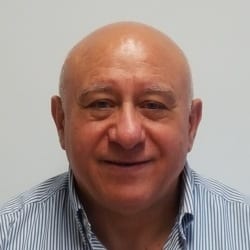 Edriss S. Titi is the holder of the Arthur Owen Professorship of Mathematics in Texas A&M University, since 2014. He is also a Professor of Computer Science and Applied Mathematics at the Weizmann Institute of Science since 2003. Moreover, he is Professor Emeritus, University of California, Irvine, where he used to hold (1988-2013) a joint appointment in the Department of Mathematics and the Department of Mechanical and Aerospace Engineering. He received a B.Sc. (1979) and a M.Sc. (1981) from the Technion, I.I.T., and a Ph.D. (1986) from Indiana University. He was an L.E. Dickson Instructor at the University of Chicago (1986-1988), and at the Mathematical Sciences Research Institute, Cornell University, (1988-1989).

Titi’s research in applied and computational mathematics focuses on investigating nonlinear scientific phenomena and it lies at the interface between rigorous applied analysis and physical applications. The applications include fluid mechanics, planetary oceanic and atmospheric circulation models, turbulence, chemical reactions, efficient numerical methods, dynamical systems and control theory. Titi will use the Guggenheim Fellowship to advance the rigorous mathematical study and justification of the atmospheric dynamics climate models with moisture, and to investigate and develop downscaling algorithms for data assimilation of weather and climate predictions.

Titi’s scholarly achievements have earned him various awards and recognitions. He was the Orson Anderson Scholar (1997-1998) and the Stanislaw M. Ulam Scholar (2002-2003), both at the Los Alamos National Laboratory. In 2004 he was elected Fellow of the Institute of Physics, UK. In 2009 he received the Humboldt Research Award; and also shared the Society for Industrial and Applied Mathematics (SIAM) Prize on Best Paper in Partial Differential Equations. In 2012 he was elected as a fellow of both the Society for Industrial and Applied MathematicsSIAM), and of the American Mathematical Society (AMS). He received the Einstein Visiting Fellow award, from the Einstein Stiftung/Foundation, Berlin, (2018-2020).