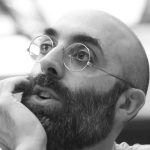 Eduardo Halfon was born in 1971 in Guatemala City. He moved to the United States with his family in 1981, went to school in South Florida, and then studied Industrial Engineering at North Carolina State University. Later, back in his native Guatemala, he was Literature Professor during eight years at Universidad Francisco Marroquín. Although bilingual, he chooses to write in Spanish.

During his Guggenheim Fellowship, Halfon will be working on the narrative of his Polish grandfather’s experience in the Holocaust, already begun in his book El boxeador polaco (The Polish Boxer), a fragment of which can be read here.

In 2007, he was named one of the 39 best young Latin American writers by the Hay Festival of Bogotá.