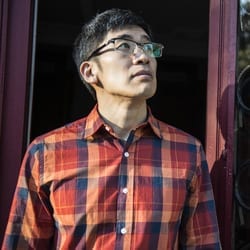 Writer, independent scholar, and full-time freelance translator since 2006, Edward Gauvin (PhD, USC) has made a living by translating almost exclusively creative work in various fields from film to fiction, with a personal focus on contemporary comics (BD) and post-Surrealist literatures of the fantastic. His work has appeared in The New York Times, The Guardian, Harper’s, and World Literature Today. It has also been shortlisted for several major prizes (Oxford Weidenfeld, Albertine, John Dryden, French-American Foundation) and awards (Best Translated Book, National Translation). He has received fellowships from the NEA, PEN America, the Fulbright program, and the Centre National du Livre, as well as residencies from Ledig House, the Lannan Foundation, the Banff Centre, and the Belgian government. A multiple grantee of the French Voices program from the French Embassy, he is a frequent contributor to their cultural initiatives. As a translation advocate, he has written widely, spoken at universities and festivals, and taught at the Bread Loaf Translation Conference, where he will be returning (virtually) this summer. The translator of over 400 graphic novels, he is a contributing editor for comics at Words Without Borders.