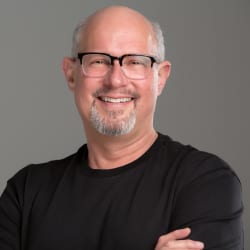 Edward Jacobs began playing violin along with all the other third- and fourth graders, but upon hearing a jazz quartet switched to the saxophone at age ten. Undergraduate work at the University of Massachusetts, Amherst in saxophone (Lynn Klock), and then in composition (Salvatore Macchia, Robert Stern) was followed by graduate study at the University of California, Berkeley in composition (Andrew Imbrie, Olly Wilson, Gerard Grisey); and a doctorate at Columbia University (Chou Wen-Chung, Mario Davidovsky, Martin Boykan, George Edwards).

Jacobs’ writes music for instruments, voices and electronic media in contexts varying from soloist to chamber ensemble, orchestra and concerto to choir. His music is heard in performance in the U.S., Europe, and Asia, and is published by C. F. Peters Corp. (NY), APNM and ACA. Recordings are available on the Open G (Aural History for clarinet & piano; A Function of Memory for clarinet and fixed media), Innova (Passed Time for brass quintet), and Ablaze (Release for orchestra, forthcoming, 2019) record labels.

In 2005 Jacobs’ work as a composer was recognized by a Charles Ives Fellowship of the American Academy of Arts & Letters. The Academy’s citation reads “Jacobs’s music masters the ‘virtual’ and ‘real’ sound habitats and embeds them into a unified and consistent single space with grace, broad orchestral imagination and expressivity. Jacobs’s music is immediately engaging, attractive and intellectually demanding.”

Jacobs began teaching at East Carolina University in 1998, where he has been Robert L. Jones Distinguished Professor of Music since 2014. He is the founding director of NC NEWMUSIC INITIATIVE, begun in March, 2001; designer of its innovative commissioning program begun in 2014; and creator of its “Young Composers” project, which has collaborated with local public school teachers in making the creation of music a fundamental part of our childrens’ education.

For more information and to listen to Jacob's music
Sound cloud