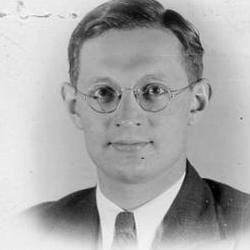 ROSEN, EDWARD:  Appointed for a study of the role of hypothesis in the emergence of modern science, with special reference to the Copernican revolution in astronomy; tenure, twelve months from June 15, 1941.

Instructor in History, 1926—, College of the City of New York.

Publications:  Three Copernican Treatises, 1939. Articles in Osiris, Journal of the History of Ideas.