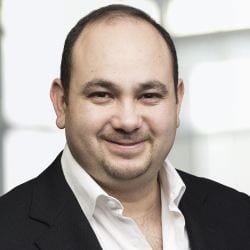 Ehab Abouheif is an integrative biologist working at the intersection of ecology, evolutionary and developmental biology. He earned his PhD from Duke University in 2002 with Gregory A. Wray, and from 2002-2004 was a postdoctoral fellow with Nipam H. Patel at the University of Chicago and the University of California, Berkeley. In 2004, he returned home to join the Department of Biology at McGill University in Montreal, Canada, where he is currently a James McGill Professor.

Professor Abouheif’s work is covered in many leading textbooks in a diversity of fields, including basic biology, ecology, evolution, and development, and has received extensive media attention. He has given over 50 lectures world-wide, and led the establishment of a new Society in his field as President called the Pan-American Society for Evolutionary Developmental Biology. Professor Abouheif was awarded several prestigious national and international awards: Alfred P. Sloan Fellowship (2006), NSERC E.W.R. Steacie Award (2014), and in 2016 was elected to the Royal Society of Canada’s College of New Artists, Scholars, and Scientists. Professor Abouheif has leveraged this scientific success to promote societal change – he has given many open lectures promoting the integration and compatibility between Islam and Evolution, and recently established the McGill Centre for Islam and Science. In September 2014, Abouheif was recognized for his effort to enhance the crosstalk between science and society by the Canadian Arab Institute, and was named a “Canadian Arab to Watch.”

In 2012, Professor Abouheif’s research made a major advance. His lab revealed that genetic potentials, which lay dormant for millions of years, can be revived with the right environmental triggers. His test case was a particular ant genus—Pheidole —that shares a common genetic trait, producing three distinct kinds of workers: minor workers, soldiers and supersoldiers. Though supersoldiers were lost in this genus about 35 to 65 million years ago, Abouheif’s group showed it was possible to unlock this hidden genetic potential by applying high doses of hormone at a critical stage in the larvae’s development. These dormant genetic potentials exist in all animals, as reflected by the sporadic appearance of ancestral traits in individuals that normally should not have them. These traits, such as bird’s teeth and snake’s fingers, are widespread in nature but are traditionally thought to be “freaks” that contribute little to the evolutionary process. Professor Abouheif’s discovery is changing this traditional view by showing that these dormant genetic potentials, once triggered, act as raw materials for adaptive evolution.

The Guggenheim Fellowship will provide support for Professor Abouheif to explore with students and postdoctoral researchers how ancestral genetic potentials are stored and released in biological systems. This will open future possibilities for harnessing the release dormant genetic potentials to advance medicine, biodiversity conservation, and animal / plant breeding.