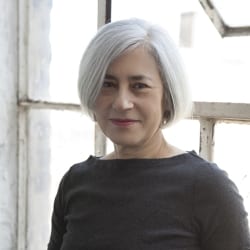 Elana Herzog is an artist who uses material culture to consider aspects of ephemerality and entropy, pleasure and pain, attraction and repulsion. She has built a visual language that is both formal and evocative, and is increasingly focused on the relationship between technology and culture, the hand and the mind, the mind and the machine. Herzog finds and collects non-precious materials that are often second hand, discarded or cheaply mass produced. Their conversion into “fine art,” as a result of her intervention, immediately raises questions of value, ownership and conservation. Where does value come from and how do we measure it? Can we, and how do we possess it?

For much the past almost twenty years, Herzog has used thousands of metal staples to embed (and then deconstruct) found textiles into various surfaces, including gallery walls, movable panels and mixed media constructions. Her installations are characterized by a mix of rigorous hard work and playful, context-sensitive experimentation, in which the labor-intensive "making" and “unmaking” is ultimately subsumed into a final product that is light-on-its-feet and almost seems to dissolve.

Elana Herzog lives and works in New York City. Among her solo and two person exhibitions are those at the Sharjah Art Museum, Sharjah, United Arab Emirates, Studio 10 in Bushwick, New York, at The Boiler (Pierogi), in Brooklyn, the Aldrich Museum of Contemporary Art in Connecticut; Smack Mellon in New York; the Herbert F. Johnson Museum at Cornell University in Ithaca, New York, and Diverseworks in Houston, Texas. “De-Warped and Un-Weft,” a survey of Herzog’s work since 1993, was at the Daum Museum of Contemporary Art in Missouri in 2009. Her work has been exhibited internationally in Norway, Sweden and Iceland, Canada, Chile and the Netherlands, and she has participated in numerous group shows at institutions such as the Tang Museum in Saratoga Springs, New York, the Weatherspoon Museum in Greensboro, North Carolina, The Kohler Museum in Sheboygan, Wisconsin, and at The Brooklyn Museum and The Museum of Arts and Design New York City.

Herzog has been awarded residencies at the Albers Foundation, in Bethany, Connecticut, Søndre Green Farm in Noresund, Norway.Gertrude Contemporary in Melbourne, Australia, the Farpath Foundation in Dijon, France, the Marie Walsh Sharpe Space Program, LMCC Workspace and Dieu Donne Paper in New York. She received the Anonymous Was A Woman Award in 2009, the Louis Comfort Tiffany Award in 2007, NYFA Fellowships in 2007 and 1999, the 2004 Lillian Elliot Award, the 2003 Lambent Fund Fellowship and the 1999 Joan Mitchell Award. She has been a lecturer at Yale University since 2012.