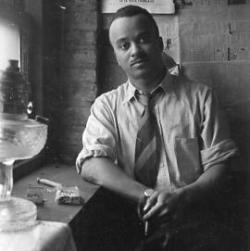 Born in Tidewater, Virginia, and raised in Chicago, African American painter and printmaker Eldzier Cortor attended Chicago’s Art Institute as well as the Institute of Design, where he studied with Laszlo Moholy-Nagy. In the 1930s he was employed by the WPA Federal Arts Project as an “easel painter,” charged with depicting scenes of African American social life in the slums of Chicago’s South Side. It was during this time that he cofounded the South Side Community Art Center.

He is best known for his celebration of the African American woman, his graceful, confident, somewhat elongated figures reflecting the influence of African sculptures. But later in his career he mined his own experiences and his reactions to current events for subjects; his series L’Abbatoire, for instance, provides stark commentary on the “horror of life” the Haitians he had lived among and immortalized in his art had suffered under the repressive and extremely violent Duvalier regime, according to Matt Backer in his explication for the 2006 exhibition “Black Spirit”: Works on Paper by Eldzier Cortor, which was organized by the Indiana University Art Museum.

Cortor rapidly rose to national prominence in the 1940s. The Julius Rosenwald Foundation granted him two Fellowships (1944, 1945) for travels in the Sea Islands of South Carolina and Georgia to paint a series of pictures depicting characteristic aspects of the life of their African American residents, and in 1946 Life magazine published one of his seminude figures. During his Guggenheim Fellowship he sought to document through his art the lives of the people of the Caribbean Islands, travelling to Jamaica and Cuba before his two-year stay in Haiti, where in addition to his own drawing and painting, he taught at the Centre d’Art in Port-au-Prince. Other honors include the Bertha Aberle Florsheim Memorial Award (1945) and the William H. Bartels Award (1946), both from the Art Institute of Chicago, and the Carnegie Award from the Carnegie Institute in Pittsburgh.

Cortor’s art has been exhibited at the Art Institute of Chicago, the Metropolitan Museum of Art in New York City, and the Museum of Fine Arts in Boston, to name a few venues, and is represented in the permanent collections of the Library of Congress, Smithsonian Institution, American Federation of Art, and Howard University in Washington, D.C.; the Museum of Modern Art and the Studio Museum of Harlem in New York City; the University of Illinois; and the Musée du Peuple Haitien in Port-au-Prince. He has entrusted his papers and many of his images to the Smithsonian Institution Archives.