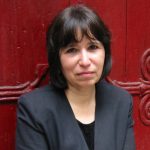 Born and raised in the Bronx and Far Rockaway, Eleanor Lerman is a lifelong New Yorker who currently lives on Long Island.

In 1973 her first book of poetry, Armed Love (Wesleyan UP), was nominated for a National Book Award. In one of the more controversial reviews of her work, the New York Times described her first book as "XX rated" for its frank discussion of sexuality and gender. Although Lerman published a second book in 1975 (Come the Sweet By and By, University of Massachusetts Press), she stopped writing poetry for twenty-five years, until Sarabande Books asked if she’d be interested in creating another volume. She was, and in 2001, Sarabande published The Mystery of Meteors. Sarabande also published her fourth book of poetry, Our Post-Soviet History Unfolds. In 2010, Sarabande published her fifth volume of poems, The Sensual World Re-Emerges.

Along with her poetry, Lerman’s fiction has been published in numerous literary journals and she has produced two collections of short stories: Observers and Other Stories (Artemis Press, 2006) and  The Blonde on the Train (Mayapple Press, 2009). In September 2011, Mayapple Press, which is based in Woodstock, New York, will publish her first novel, Janet Planet.

Lerman has received numerous awards, including the inaugural Juniper Prize from the University of Massachusetts Press, the 2002 Joy Bale Boone Award for Poetry, the 2006 Milton Dorfman Poetry Prize, and a fiction grant from the New York Foundation for the Arts. In 2006, Our Post-Soviet History Unfolds won the Lenore Marshall Prize, given by the Academy of American Poets and The Nation. In 2007, she received a Literature Fellowship from the National Endowment for the Arts.