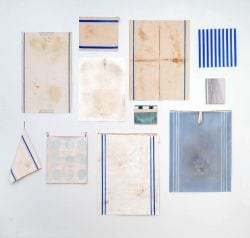 Elena del Rivero has dedicated her work to study diverse written and visual forms for communicating personal experiences with an emphasis in the epistolary format. Born in Valencia, Spain, she has lived in New York since 1991. Her focus is on painting and works on paper but she has also produced large-scale installations and performances with an interest in printmaking and analog photography. She welcomes improvisation and free associative connections and meanings amass over extended periods of time. One of her ongoing drawing series, “Letter to the Mother,” initially inspired by Franz Kafka’s Letter to his Father, has, since the 1990s, grown in various directions. Del Rivero draws inspiration from what is at hand, historical events that she has witnessed, and the everyday with its multiple symbolical references. She contemplates a utopian idea of mending action that she takes whenever the opportunity arises when the works get damaged, intentionally or not, during the process of making them; in this manner she, metaphorically, sutures their "wounds". The kitchen historically has been the “female grid,” and it is this paradoxical and political place, the symbol par excellence of domesticity that has become her laboratory of ideas.