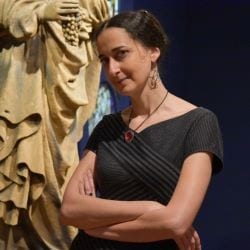 Elina Gertsman is Professor of Medieval Art at Case Western Reserve University. In addition to numerous articles, she has authored The Dance of Death in the Middle Ages: Image, Text, Performance (2010), the winner of the John Nicholas Brown Prize from the Medieval Academy of America for the best first book in medieval studies, as well as Worlds Within: Opening the Medieval Shrine Madonna (2015), shortlisted for the Charles Rufus Morey Prize, which won the Academy' inaugural Karen Gould Prize in Art History awarded to an outstanding book in medieval art history. Her most recent book, The Middle Ages in 50 Objects (2018), was co-authored with Barbara Rosenwein. She is the editor of several books, including Visualizing Medieval Performance (2008), Crying in the Middle Ages (2011), and Medieval Art and Abstraction (forthcoming in 2021). With Stephen Fliegel, she published a catalogue that accompanied the exhibition they co-curated, "Myth and Mystique: Cleveland' Gothic Table Fountain" (2016). Her work has been supported by the Kress, Mellon, and FACE Foundations as well as by the American Council for Learned Societies. Her latest monograph, Nothing is the Matter: Spaces of Absence in Late Medieval Art, will appear in 2021. Photo Credit: Keri Schimelpfenig