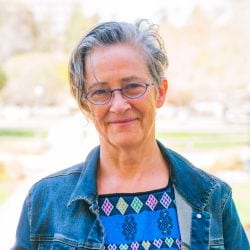 I am the eldest child of Charles Le Guin, a professor, writer, and master gardener, and the recently departed Ursula K. Le Guin, a well-known writer of fantasy and science fiction. I am currently Professor of Musicology in the UCLA Herb Alpert School of Music. I have taught at UCLA since 1997.

I was initially trained as a Classical musician; I have a BMus in cello performance from the San Francisco Conservatory of Music (1979), and was a free-lance cellist for many years, specializing in early European repertories and practices, especially continuo. Over the period between 1981 and 2005, I played in many recordings of orchestral and chamber music on a variety of labels.

I graduated from UC Berkeley in 1997 with a dissertation on the Italian-Spanish composer Luigi Boccherini. This formed the basis of my first book, Boccherini’s Body: an Essay in Carnal Musicology. (University of California Press, 2006). UCP also published my second book, The Tonadilla in Performance: Lyric Comedy in Enlightenment Spain, in 2014; it is a genre study of a minor music-theatrical genre, the tonadilla, and a meditation on the importance of interstitiality and “mere” comedy in art. It was awarded the Otto Kinkeldey Prize by the American Musicological Society, for “a musicological book of exceptional merit…by a scholar beyond the early stages of their career.”

All my research and published work, all my teaching and activism, and all my music-making, are concerned with exploring the rich tensions between theory and practice, idea and performance, or (as Richard Taruskin put it) Text and Act.

During the process of researching that second book, a chance encounter on a Madrid streetcorner led me to son jarocho, the traditional music of the Sotavento region of Veracruz state in Mexico. I fell hard in love with this energetic, vivid, profoundly syncretic music, and with the communities it creates and sustains. Since 2008 I have participated in the biweekly taller (workshop) at El Centro Cultural de México in Santa Ana, CA. I am currently a Santa Ana resident, and a Board member and a responsable within the internal governance structure of El Centro, which is modeled on decentralized Zapatista practice–even as I chair the department of Musicology at UCLA, whose governance model is very different indeed.

My project funded by the Guggenheim Foundation is intended as a gift to the Centro’s extraordinary community of ordinary people: musicians, activists, immigrants.