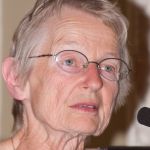 Traugott has done research in historical syntax, semantics, and pragmatics, lexicalization, socio-historical linguistics, and linguistics and literature. Publications include A History of English Syntax (1972), Linguistics for Students of Literature (1980; with Mary L. Pratt), On Conditionals (1986; co-edited with Alice ter Meulen, Judith Snitzer Reilly, and Charles A. Ferguson), Grammaticalization (1993, 2nd much revised ed. 2003; with Paul Hopper), Regularity in Semantic Change (2002; with Richard B. Dasher), Lexicalization and Language Change (2005; with Laurel J. Brinton), and Gradience, Gradualness, and Grammaticalization (2010, co-edited with Graeme Trousdale). She has been a Fellow at the Center for Advanced Study in the Behavioral Sciences, and is a Fellow of the American Association for the Advancement of Science and Corresponding Fellow of the British Academy. She holds honorary doctorates from the Uppsala University and Helsinki University.

Her current research focuses on ways to bring the theories of grammaticalization and construction grammar to bear on accounts of micro-changes.