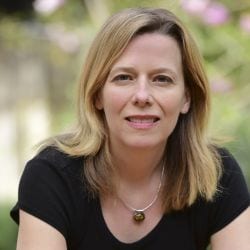 Elizabeth Carolyn Miller is Professor of English at the University of California, Davis and a scholar of nineteenth- and early-twentieth-century literature of the British Empire. Her research has focused on literature’s overlapping relations with ecology, industry, media, and capital. She is the author of two monographs: Slow Print: Literary Radicalism and Late Victorian Print Culture (Stanford, 2013), which received the Best Book of the Year award from the North American Victorian Studies Association as well as Honorable Mention for the Modernist Studies Association Book Prize, and Framed: The New Woman Criminal in British Culture at the Fin de Siècle (Michigan, 2008). Miller has also guest edited a special issue of Victorian Studies on “Climate Change and Victorian Studies” (Summer 2018) and co-edited a forthcoming collection on teaching William Morris.

Her current project, Extraction Ecologies and the Literature of the Long Exhaustion, 1830s-1930s, explores the rise of large-scale industrial mining and the magnitude of its social and environmental impacts – impacts that extend deeply into literary form, and deeply into our present moment. The nineteenth-century British imperial world saw a ramping up of extraction as the steam engine and other new technologies, including new explosives, contributed to an unprecedented acceleration in extraction and the global establishment of an extractivist version of ecological imperialism. Tracking the relations between extraction and literature in the first century of the industrial era, an era marked by violent mineral resource rushes and massive overseas investment, the book reads literary history as an archive of environmental disaster. The texts discussed in this project are set in various corners of the British Empire, often in so-called sacrifice zones, but they all capture a new vision of civilization where humans are imagined to be dependent on finite, non-renewable stores of mineral resources, incapable of replenishment or rebirth.

Previously Elizabeth Carolyn Miller’s work has been supported by a National Endowment for the Humanities Fellowship, the Charles A. Ryskamp Fellowship from the American Council of Learned Societies, and the Public Goods Council Postdoctoral Fellowship from the Mellon Foundation.