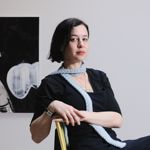 Ellen Berkenblit was born in 1958 in Paterson, New Jersey, and is an American painter. She received her B.F.A from The Cooper Union in 1980 and lives and works in New York City. She is represented by Anton Kern Gallery. Her paintings are made with a distinctive palette of vigorously mixed colors with assertive broad brushstrokes and some scraping of the palette knife. Her shapes are rough yet well-defined fields of color; occasional black outlines can define an object, an animal, or the features of a face. Out of the paintingsÊ¼ visceral physicality emerge certain themes, motifs, and ideas: a head in profile featuring intense black lashes and long shimmering hair, lacey ribbons (painted as angular and deliciously awkward bands of paint that vigorously pull together the paintingsÊ¼ fore- and middle-grounds). Even purely atmospheric sensations such as clouds, bolts of sun light, rainbows, and starry night skies find expression. These images simultaneously emerge out of the subjectsÊ¼ relevance and the visibly exuberant act of painting. The paintingsÊ¼ spirit is bold, boisterous, and forceful, sometimes mysterious, always deeply emotional. The interplay between figurative elements, the intense atmosphere created by color contrast and tonal palette, as well as the compositional devices, create figurative paintings of great fluidity and openness without being narrowed by narrative.