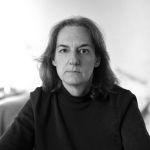 Emily Fragos’s acclaimed first book of poems, Little Savage, was published by Grove Press in 2004. Her newest collection, Hostage: New & Selected Poems (Sheep Meadow Press, 2011), was considered for the National Book Critics Circle Award. She is the 2014 recipient of the Arts & Letters Award in Literature from the American Academy of Arts and Letters.

Emily Fragos has selected and edited five best-selling anthologies for the Everyman’s Pocket Library: The Letters of Emily Dickinson, Music’s Spell, The Dance, The Great Cat, and Art & Artists. Her poems have appeared in The New Yorker, Poetry, Best American Poetry, The American Poetry Review, The New Republic, The Paris Review, The Boston Review, Ploughshares, Parnassus, The Threepenny Review, The Yale Review, The Cimarron Review, The Dish, and numerous other journals.

She has also served as guest poetry editor of Guernica and written numerous articles on dance and music for Bomb, Pointe, Playbill, International Piano, the Suzanne Farrell Ballet at the Kennedy Center, and the National Ballet of Canada. She wrote the libretto for Don Quixote for the latter two companies.

Several of her poems have been chosen for inclusion in anthologies and have been translated into Greek, Japanese, and Spanish. She has given many readings of her poetry, principal among them are the 92nd St. Y’s “Tenth Muse” program, the Dodge Poetry Festival, the Joaquin Miller Poetry Series in Washington, D.C., and Fordham’s Poets Out Loud. She has been interviewed for the Paris Review blog, upstreet magazine, and  Guernica (“An Eternal Poet”).

Emily Fragos has long volunteered to teach poetry workshops for the disabled and elderly at nursing/rehabilitation centers in Westchester, New York. She has taught at Yale and currently teaches at New York and Columbia universities.