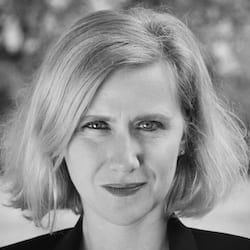 Emily Greble is an historian of modern Europe. Her research explores how the Balkans challenge presumptions about European history. To find new stories and unfamiliar perspectives, she embraces the detective work of archival research on the margins of Europe, from the coasts of the Adriatic to mountainous towns in the Balkan interior. She is the author of Muslims and the Making of Modern Europe (Oxford University Press, forthcoming fall 2021) and Sarajevo, 1941-1945: Muslims, Christians, and Jews in Hitler’s Europe (Cornell University Press, 2011). She is Associate Professor of History and German, Russian and East European Studies at Vanderbilt University and previously taught at the City College of New York (CCNY).

Greble received her Ph.D. from Stanford University in 2007 and her BA from the College of William and Mary in 1999. She has held fellowships from the National Endowment for the Humanities, Fulbright, Fulbright-Hayes, IREX, ACLS, the Remarque Institute, the Belfer Center for Science and International Affairs, and the Center for Advanced Holocaust Studies. With the support of the Guggenheim fellowship, Greble will write a book about legal encounters on the European-Ottoman border.