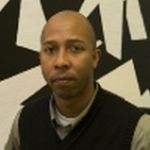 Appointed for painting, Enrico Riley received a B.A. in Visual Studies from Dartmouth College in 1995 and an M.F.A. in painting from Yale University in 1998. He has twice been awarded residencies at the Vermont Studio Center. His paintings and drawings have been shown in solo exhibitions at Pageant Gallery in Philadelphia, Pennslyvania, and The Karl Drerup Art Gallery in Plymouth, New Hampshire. His work has also been included in group exhibitions such as Lori Bookstein Fine Art, Reeves Contemporary, and the American Academy of Arts and Letters, all in New York City, as well as the Museum for the National Center of Afro-American Arts in Roxbury, Massachussetts, among other venues. In 2004, Mr. Riley was awarded an American Academy of Arts and Letters Purchase Prize for his painting "Giant Steps," which was placed at the Virginia Museum of Fine Arts. Mr. Riley is currently a Senior Lecturer and Area Head of Painting and Drawing in the Studio Art Department of Dartmouth College.