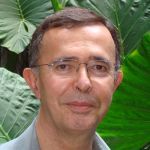 Enrique González González was born in Cotija, Mich., Mexico, in 1951. After obtaining his bachelor’s degree and while he prepared his master’s degree in the Facultad de Filosofía y Letras (FFyL) of the Universidad Nacional Autónoma de México (UNAM), he was granted a scholarship by the National Council of Science and Technology (CONACYT) in order to contine his doctoral studies at the University of Valencia in Spain, with Dr. Mariano Peset as dissertation advisor, undoubtedly the most remarkable living historian of universities in the Spanish and Latin American world. In 1991 Mr. González defended his doctoral dissertation entitled “Legislación y poderes en la Real Universidad de México. Siglos XVI y XVII” (Legislation and Powers in the Royal University of Mexico. XVI and XVII centuries), obtaining a magna cum laude distinction.

Since 1983 he has been a researcher for the Centro de Estudios sobre la Universidad (CESU; currently the Instituto de Investigaciones sobre la Universidad y la Educación, IISUE) of UNAM, and since 1996, he has steadily obtained the maximum level in the program of Awards to Academic Accomplishment (PRIDE). He was also admitted in 1991 to the National System of Researchers (SNI), and by the year 2000 he was promoted to Level III. In 2010, he was once again awarded Level III, the highest recognition granted, for the coming ten years.

Enrique González González began his career as a high school teacher in 1973, and later began to teach at a graduate and doctorate level in the FFyL-UNAM. He has also been a Guest Professor in the universities of Valencia, Salamanca, and La Rábida (Spain), in Leuven (Belgium), Messina (Italy), and in Guadalajara (México). Since then, in addition to his work directing the Seminar “European Humanism and New Spain Culture” in the FFyL, he has also coordinated in his Institute various noncurricular seminars for candidates to master’s and doctoral degrees. Besides giving group advice, he directed four bachelor’s theses, nine master’s theses (with two more currently under way), four doctorate theses (with six more in progress). He has also participated in numerous doctoral committees for now successful scholars and current candidates, while fifteen of his former students are today professors or scholars at the UNAM and other universities. The book Del aula a la ciudad (2010; From the classroom to the city) is the result of a recent seminar group and it includes essays that were written and discussed in a spirit of teamwork, stemming from the respective theses of eleven former scholarship students.

For over twenty-five years González has developed two main complementary guidelines of research. Firstly, he has been interested in the influence of Renaissance humanism in Spanish and Latin American universities of the Early Modern Period. He has focused his attention on the study of the exceptionally widespread dissemination of the work of Spanish humanist Juan Luis Vives (1492/93-1540) and also, parallel to this, on the harsh criticism the humanist made of the various sciences offered by the universities of his time, which he considered in urgent need of profound reformation. In 1987, Juan Lluís Vives. De la escolástica al Humanismo (Joan Lluís Vives: From Scholastics to Humanism) was published in Valencia, a work in which González resets the traditional chronology of Vives’ life and work, while arguing the need for rigorously studying its transmission and reception. After this publication, he coordinated, along with two other colleagues, an exhibition at the University of Valencia (1992), which included an especially rich catalogue. Its main purpose was to stress the question of where and when the edicions prínceps of the humanist’s profuse work, were actually published. The exhibition was inaugurated by the King and Queen of Spain. After this event, González further broadened his research: he visited (along with his collaborator Víctor Gutiérrez) some three hundred European and American libraries, undertaking a register of over 1,500 different editions of Vives's works between the 16th and 18th centuries, through direct consultation of the books, not merely bibliographical catalogues. In 1999 a volume dedicated to the school text known as Dialogues, was published, in which some 601 editions were described and classified. The rest of Vives’s printed works will appear in another two volumes, currently under preparation.

Besides issues currently under study, such as Vives’s viewpoint on universities, or his condition as an exile due to his family background as Jewish converts to Catholicism, in 2007 González published Una República de lectores. Difusión y recepción de la obra de Juan Luis Vives (A Republic of Readers. Diffusion and Reception of Juan Luis Vives’s Works). This research covers five centuries of reading and dissemination of the Spanish humanist’s work on a vast geographical scale, from Jesuit colleges in India and Lithuania to the New World. Throughout these pages he exposes the paradoxical fact that while Vives had been one of the three humanists most widely read in all Europe in the 16th century, he had been equally cast into oblivion, or better still, into a muffled recognition, for he was actually read, but rarely quoted. The causes of this contrast were due, among other reasons, to the fact that as both a Spaniard and a Catholic, he was regarded with growing contempt by those powers hostile to Spain, as well as by the Protestant world in general. González also shows, by pointing out the conditions of a gradual recovery of his memory from the 19th century on, that the same factors continue to hinder today, albeit tacitly, the recognition due to the work and influence of an author that in other times was widely appreciated. In 2008 the book received the Instituto Nacional de Antropología e Historia Award for the best research of the year in Mexico in the fields of theory of history and historiography. González’ studies on Vives, published in several countries, have received reviews in a half dozen languages. Nine appeared for República de lectores, while Vives, Edicions prínceps (Valencia, 1992) was reviewed in The Library, the official periodical of The British Library. Over 180 citations have been made by Vives scholars, from Mexico to Sweden, and by specialized publications as prestigious as Humanistica Lovaniensia, the Bibliothèque d’Humanisme et Renaissance, or Rinascimento. Aware of the convenience of renewing Carlos Noreña’s rather old-fashioned reference book (Juan Luis Vives, The Hague, 1970), Charles Fantazzi decided to elaborate A Companion to Juan Luis Vives (Brill, Leiden-Boston, 2008). González was invited by Fantazzi to write the opening chapter (“Works and days," pp. 15-64) as well as the last one (“Fame and Oblivion," pp. 359-413).

The second line of research by Enrique González González, which receives feedback from the previous one, is focused on the history of Hispanic universities in modern times, and particularly that of colonial Mexico. González was mainly interested in exploring the interferences of public powers (both civilian and ecclesiastic) in the creation and internal functioning of Old Regime universities. He claims that, at least as regards the university of Mexico, these power struggles largely determined the nature of university law. In other words, the successive ordinances regulating its activities did not obey the purpose of introducing “academic” innovations as much as that of imposing the supremacy of one power group. He studied the way in which the first statutes were dictated at the moment of creating the university in 1553 and, later on, he analyzed the circumstances accompanying the introduction of successive constitutions, which were always the result of a royal visit, provoked by internal conflicts, such as those of the oidor (royal judge) Farfán (1580), of the archbishop viceroy Moya de Contreras (1586), of viceroy Cerralvo (1624), and those “definitive” reforms of bishop Palafox (1644). In his doctoral thesis, Gonzalez undertook a previous edition of each one of these legal codes: those of 1553 and those of Cerralvo (1624). The case of Mexico made him wonder about what had really happened in other universities, and he gradually began exploring the social, political, and cultural conditions which allowed for their implantation and consolidation in America. For this research, not only did he consult the very rich archive of the old university of Mexico, but he also benefited from scholarships and sabbatical leaves which enabled him to spend long periods at the Archivo General de Indias (Seville) and the Archivo Histórico Nacional (Madrid). He combined his attendance at international congresses with visits to universities both in Spain and South America. Parallel to the question of powers and the university, he explored adjoining subjects that contributed to a better knowledge of the colonial institution, namely and above all, aspects of the history of the Church, which was the main professional destiny of graduates. He has thus collaborated in the study and edition of the four provincial councils of the Mexican Church. He also dealt with the university visitors, and examined the viewpoint of various literate and semiliterate actors regarding great epoch-making debates, such as the encomienda, or the acceptance or refusal of illustrated reforms. González is increasingly attracted to the study of the circulation of books, specially of an academic nature. In short, besides the books he has coordinated, he has published over fifty articles and chapters in specialized academic publishing houses in Mexico and other countries.

He has participated in the eleven Congresses held on the History of Hispanic Universities from 1987 to the present in Spain and Mexico, which has permitted the exchange of points of view with scholars from other institutions. Half of these exchanges have taken place in his Institute where, along with other colleagues such as Leticia Pérez, he coordinated four collective volumes on modern universities and colleges. The above-mentioned works have received over 280 citations and several reviews in North American, Mexican, Spanish, and Italian magazines, not to mention History of Universities (2009), where in a long essay he offers challenging views on the existing historiography related to the university and colleges in New Spain. González was elected member of academic associations in Salamanca, Madrid, and Valencia, all of them dedicated to the history of the university, and also of the International Commission for the History of Universities. Moreover, the Academia Portuguesa da História elected him a “worthy member."

In 2008 Estudios y estudiantes de Filosofía: De la Facultad de Artes a la Facultad de Filosofía y Letras (1553-1929), was published, a history of the minor faculty of Arts, from its creation in 1533 up to the present Faculty of Philosophy. This work was the result of a three-year research seminar, and it deals with institutional, curricular, economic, and political aspects related to the Faculty of Arts, including the estimate of its matriculations, graduates, and professors, and the professional destinies of bachelors and masters in Arts. He also examines the changes that came about with the Independence in “secondary” studies, up to the 20th century when the current National University was founded. One new publication of the seminar, undertaken this year, will study the history of three of the major faculties: Law, Canons, and Theology, and of former theologians and jurists.

Lastly, since 1987 Gonzalez has been directly involved in publishing the emblematic collection La Real Universidad de Mexico. Estudios y Textos (The Royal University of Mexico. Studies and Texts), whose twenty-fourth number has just come out, while three other issues are presently in progress.