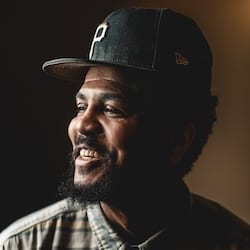 Ephraim Asili is a filmmaker, artist, educator and DJ whose work focuses on the African diaspora as a cultural force. Asili has won critical acclaim for The Diaspora Suite (2017), an ambitious cycle of 16 mm short films, and most recently his feature-length The Inheritance (2020), a poetic meditation on history, politics, art, and Black liberation. His award-winning films have screened in festivals and venues all over the world, including the New York Film Festival, Toronto International Film Festival, International Film Festival Rotterdam, The Berlinale, MoMA PS1, LAMOCA, The Whitney Museum, and The Barbican Center in London. Asili's 2020 feature debut The Inheritance premiered at the 2020 Toronto International film festival and was recently picked up for distribution by Grasshopper Films. Asili currently resides in Hudson, NY, and is a Professor of Film and Electronic Arts at Bard College.

Photo courtesy of the Artist.