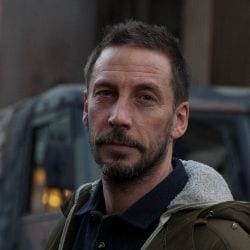 Eric Baudelaire (1973, Salt-Lake-City) lives and works in Paris, France. After training as a social scientist, Baudelaire established himself as a visual artist with a practice incorporating photography, printmaking and video, often focused on social and historical research. Since 2010, he has devoted himself more seriously to filmmaking. His feature films Also Known As Jihadi (2017), Letters to Max (2014), The Ugly One (2013) and The Anabasis of May and Fusako Shigenobu, Masao Adachi and 27 Years Without Images (2011) have circulated widely in film festivals (including the Locarno, Toronto, New York, Rotterdam and Marseille film festivals). Baudelaire integrates his films into broad exhibition projects along with works on paper, performance, publications, public programs and screenings, such as APRÈS at the Centre Pompidou, Paris, and The Secession Sessions at Berkeley Art Museum / PFA, Bétonsalon in Paris, and Bergen Kunsthall. Baudelaire has had monographic exhibitions at the Witte de With, Rotterdam, the Fridericianum, Kassel, the Beirut Art Center, Gasworks, London, and the Hammer Museum in Los Angeles, and has participated in the 2017 Whitney Biennale, Sharjah Biennials 12 and 13, and the 2014 Yokohama Triennale. His work is in the collections of the Museum of Modern Art and the Whitney Museum of American Art in New York, the Reina Sofia Museum in Madrid, the MACBA in Barcelona, the Centre Pompidou in Paris, and M+ in Hong Kong.