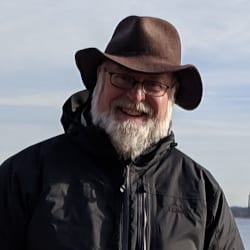 Eric W. Sanderson is a Senior Conservation Ecologist at the Wildlife Conservation Society, where he strives to build a more sustainable relationship between people and the rest of nature, using science, history, kindness, and creativity. Sanderson is the author of Mannahatta: A Natural History of New York City (Abrams, 2009) and Terra Nova: The New World after Oil, Cars, and Suburbs (Abrams, 2013), and lead editor of Prospects for Resilience: Insights from New York City’s Jamaica Bay (Island Press, 2016). He has published numerous scientific papers on wildlife and landscape conservation. His work has been featured in National Geographic magazine, The New York Times, The New Yorker, and other outlets.

Sanderson is working on an atlas and gazetteer to the indigenous landscape of the five boroughs of New York City. He is also writing a landscape history to the city, starting before colonization and going backward. He and his colleagues have built a website for the Welikia Project where one can explore the block-by-block ecology of the c. 1609 landscape, and another where one can imagine the city’s ecological future through Visionmaker.nyc.