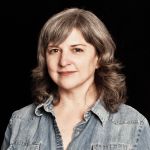 Erin Courtney's play A Map of Virtue, produced by 13P and directed by Ken Rus Schmoll, was awarded an Obie and described as "a delicate gem" and "a resonant tale of loss" by the New York Times. Ms. Courtney's other plays include Honey Drop, Black Cat Lost, Alice the Magnet, Quiver and Twitch, and Demon Baby. Her work has been produced and developed by Clubbed Thumb, The Flea, New York Stage and Film, Adhesive Theater, Soho Rep, The Vineyard, and The Public. She has collaborated with Elizabeth Swados on the opera Kaspar Hauser and is starting work on a new musical with Ms. Swados on the life of Isabelle Eberhardt. She has been a resident at the MacDowell Colony, a recipient of a NYSCA grant, and two MAP Fund grant from the Rockefeller Foundation. Demon Baby is published in two anthologies; New Downtown Now, edited by Mac Wellman and Young Jean Lee and published by University of Minnesota Press, and Funny, Strange, Provocative: Seven Plays by Clubbed Thumb edited by Maria Striar and Erin Detrick and published by Playscripts, Inc. A Map of Virtue and Black Cat Lost are published by 53rd State Press. She is an affiliated artist with Clubbed Thumb, a member of 13P and of New Dramatists, and a cofounder of Brooklyn Writers Space. She earned a B.A. from Brown University (1990) and an M.F.A. from Brooklyn College (2003), where she currently teaches in the M.F.A. playwriting program.