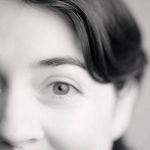 Erin Gee received her Bachelor’s and Master’s degrees in piano and composition, respectively, from the University of Iowa, where she studied with Réne Lecuona, Lawrence Fritts, and Jeremy Dale Roberts. In Austria and Germany, she studied composition with Beat Furrer, Mathias Spahlinger, Chaya Czernowin, Richard Barrett, and Steve Takasugi. She completed her Ph.D. in music theory at the University of Music and Dramatic Arts Graz in 2007.

Ms. Gee’s awards for composition include the Teatro Minimo first-round prize from the Zürich Opera House, the International Rostrum of Composers Award, the Samuel Barber Rome Prize, the Impuls award, the Gianni Bergamo Prize, the SKE Prize, the Austrian Government Grant for composition, the Pelzer Award, the Publicity Prize 2005, a CAP award from the American Music Center, the Look & Listen Festival Prize, the Judith Lang Zaimont Prize, and the Composition Prize for the city of Graz 2008. She has worked with the Radio Symphony Orchestra Vienna, the Vokalensemble Zürich, the Los Angeles Philharmonic New Music Group with conductor Esa-Pekka Salonen, the Latvian Radio Chamber Choir, Klangforum Wien, Ensemble Recherche, Alter Ego and Ensemble Surplus, Duo Contour among others. In 2005, she was a guest artist at the Akiyoshidai International Art Village, Japan, where she returned to teach and perform in 2006. The Wittener Tage für Neue Musik, Klangspuren, Musikprotokoll, Steirischer Herbst, Klangriffe, Zürich Tage für Neue Musik, the Look and Listen Festival, Vienna Mozartjahr 2006, Diskurs Festival, the MATA Festival, Nuovo Consonanza, the Shut up and Listen Festival, and the 4020 Festival have featured Ms. Gee’s works.

Her opera, SLEEP, was premiered by the Zürich Opera House in January 2009. In November 2009, the American Composers Forum will premiere a new work at Zankel Hall in Carnegie Hall and the Zurich Tage für Neue Musik will host a premiere performed by Repertorio Zero. In 2009 Erin Gee will be a fellow at the Radcliffe Institute for Advanced Study and the Montalvo Arts Center. In 2010, she will be in residence at the Akademie Schloss Solitude in Stuttgart.