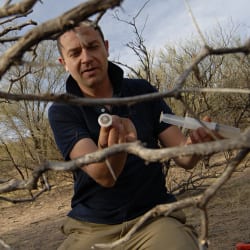 Trained in agronomy (University of Buenos Aires, 1993) and ecology (Duke University, 2002), Dr. Jobbágy is now a Principal Investigator in “Grupo de Estudios Ambientales,” a team of ecologists, agronomists, and physicists that belongs to CONICET and Universidad Nacional de San Luis. Esteban Jobbágy received the Bernardo Houssay Young Investigator award in Biology/Agronomy from the President of Argentina in 2009.

Dr. Jobbágy spent most of his career exploring how vegetation and its human-imposed transformations influence energy and material fluxes, being always fascinated by how plants leave their imprint on different aspects of the non-living world, such as soil inorganic chemistry and mineralogy, groundwater hydrology, or salt dynamics. His development of novel scientific insights has been accompanied by relevant contributions to land management/conservation, agriculture, and forestry. Repeatedly, he has established connections among disciplines (ecology, biogeography, geochemistry, hydrology, crop science, and recently social sciences) and expanded the array of research tools and study systems applied in these fields.

The Guggenheim fellowship gives Dr. Jobbágy the opportunity to connect his work and capacities with the emerging exploration of society-ecosystem interactions. Asking to what extent a given piece of land would change its functioning (carbon, nutrient, or water cycling, fire regimes) under high vs. low rural population density, or under affluent vs. poor, or globalized vs. isolated economies; he is comparing dry subtropical ecosystems subject to diverse management regimes in Africa, Asia, and the Americas.