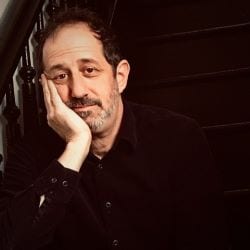 Ethan Lipton is a Brooklyn-based playwright, songwriter and singer. Produced plays include TUMACHO, RED-HANDED OTTER, LUTHER, GOODBYE APRIL HELLO MAY, 100 ASPECTS OF THE MOON, and MEAT. His musicals NO PLACE TO GO (Obie award) and THE OUTER SPACE (Lortel nom.) were produced by the Public Theater in Joe's Pub, and have toured the U.S. and Europe. Ethan was an Alpert Prize Fellow at MacDowell, a member of the Public's Emerging Writers Group and Space at Ryder Farm's Working Farm, a Playwrights Realm Page One Fellow, a Joe's Pub New York Voices and NYFA grantee, and he is a Clubbed Thumb associate artist. His plays have been published by Samuel French and Theater. With his band, Ethan Lipton & his Orchestra, he has released four albums and played NYC and beyond, including Celebrate Brooklyn, MASS MoCA, Grand Performances, Theatre de la Ville and All Tomorrow's Parties. Ethan is currently working on TALENT SHOW, a piece about the privatization of public education, and THE SEAT OF OUR PANTS, a musical adaptation of Thornton Wilder's THE SKIN OF OUR TEETH. He is a proud graduate of the Los Angeles Unified School District. More info about Ethan's plays and music on his website. Photo Credit: Arin Arbus