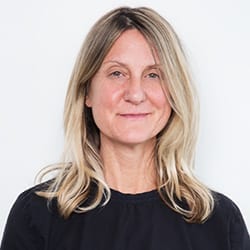 Eve Fowler is an interdisciplinary artist whose work engages a decades-long investigation of what it means to bear witness to the body, life, and work of another—with all the complexities, problems and possibilities such witnessing entails. Whether she is working through a camera’s lens or in paint, installation, sound, or public space, her practice moves in and with the margins: towards what has been unrepresented, ignored, struck from (or denied by) the record.

Her work is in the permanent collections of the Hammer Museum, the Museum of Modern Art, New York, Los Angeles County Museum of Art, the San Francisco Museum of Modern Art, and the Smithsonian Institution. Fowler earned her MFA from Yale University’s School of Art. She is a recipient of a 2016 Emergency Grant from the Foundation for Contemporary Arts, New York and a 2017 Art Matters grant. She was a Fellow at Radcliffe Institute for Advanced Study at Harvard University (2018-19).

Fowler has had solo exhibitions at Dundee Contemporary Arts, Scotland; Participant Inc, NY; and has published two books, Anyone Telling Anything Is Telling That Thing (Printed Matter, 2013) and Hustlers (Capricious Publishing, 2014).