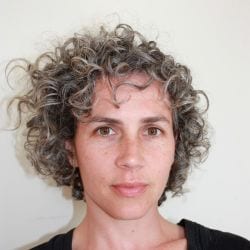 I make abstract, free-standing, double-sided paintings. I can also describe them as 2-dimensional sculptures. This blurring of formal categories carries with it the promise of a related “blur” between other ontological classes and rigid models of understanding. My recent pieces are large, geometric shapes bearing openings and holes –windows of sorts- that crop or frame the space around them. Inviting or obstructing passage and sight, the pieces include “what they are not”: the area around them, the people looking at them, the other pieces in the room.

I see my pieces as embodying connections between entities usually seen as separate, where bodies, materials and things are porous. Object-like and with bodily attributes, they exemplify a shared ground between the animate and the inanimate. They speak of an “excluded middle”, the part that is left out when things are divided into categories.”

Since the mid-2000s, Fabienne Lasserre’s work has been deeply indebted to feminist thought. She thinks of her early sculptures as bodies envisioned outside of traditional dichotomies such as male/female, self/other, inside/outside. With time, these interests extended to the context surrounding bodies rather than to corporeality itself. Still thinking of the Body as a locus for political and philosophical metaphors, she started to make forms that can enclose or frame a human. Her new abstract sculptures are less anthropomorphic; she creates painted planes of color that choreograph viewers’ gaze and motion through space. Human movement and perceptual faculties are the nexus through which she explores color, form and abstraction.

Educated at Concordia University in Montreal (B.F.A., 1996) and Columbia University, New York (M.F.A., 2004), Lasserre lives and works in Brooklyn NY. She is a full-time faculty member at Maryland Institute College of Art (MICA) since 2007. She has participated in solo and group exhibitions throughout the United States and internationally. Recent solo projects include Make Room for Space (2018, Hallwalls Contemporary Arts Center, Buffalo, NY); Les Larmes (2018, Parisian Laundry Gallery, Montreal); and C.Ar.D in città (2015, Palazzo Costa Tretenerro, Piacenza, Italy). Her work was shown in several 2-person exhibits, amongst which The Nervous Hand (2018, 315 Gallery, New York) and Fabienne Lasserre and Annette Wehrhahn (2016, Safe Gallery, New York). Some group exhibits featuring her work have been: Feed the Meter (2017, Ceysson de Bénétière, Luxembourg); Outside the Lines (2013, Contemporary Arts Museum Houston, TX), Saber Desconocer, (2013, Museo de Antioquia, Medellin, Colombia), and La Triennale québécoise, (2011, Musée d’art contemporain de Montréal). In 2017, she was awarded the Saint-Gaudens Memorial Fellowship to produce two outdoor sculptures for the grounds of St-Gaudens National Historic Site in New Hampshire. In 2016-17, she received a Sharpe-Walentas Studio Program award. In 2013 and 2014, she was the recipient of two Project Grants to Visual Artists from the Canada Council for the Arts to develop a body of sculptures that were shown in solo shows at Parisian Laundry Gallery, Montreal (Les Approches, 2015) and at Jeff Bailey Gallery, New York (Here Like a Story Like a Picture and a Mirror, 2013).