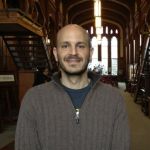 Fady Joudah is a Palestinian American physician of internal medicine and the author of three poetry collections and three volumes of poetry-in-translation. His first book of poetry, The Earth in the Attic, won the Yale Series of Younger Poets prize in 2007. Alight and Textu, his second and third poetry collections respectively, followed in 2013 from Copper Canyon Press. Textu is an ebook-long sequence composed on cell phone wherein each poem or stanza is exactly 160 characters long, using character count as poetic meter. Joudah’s translations of Arabic poetry, particularly those of Palestinian poets Mahmoud Darwish and Ghassan Zaqtan, have earned him a Banipal prize from the U.K. in 2008 for The Butterfly’s Burden, a PEN USA award in 2010 for If I Were Another, and the Griffin International Poetry prize in 2013 for Like a Straw Bird It Follows Me. The domain where language intersects the world body and the word body is an expanding sphere in Joudah’s work. His new poems move farther into the liminal zone where ecstasy is betrayed as hormone and hormone is co-opted as a language of power: where desire is both a lack and a machine, and where illness becomes internal displacement in the age of the nation-state. In search of a different facet of plurality, some of Fady Joudah’s new poems also experiment with translation as a work that questions the illusion of originality. Poems become a recombinant structure between two authors in two different languages. The results belong to a larger public memory, an act of communion across boundaries that honors English beyond the paradoxical provinciality of a lingua franca.