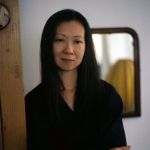 With the publication of Bone (Hyperion, 1993), an unsparing look into the lives of three daughters of Chinese immigrants in San Francisco’s Chinatown, Fae Myenne Ng seemed to burst upon the literary scene. In reality, she had been steadily refining her writing for almost two decades, and had been crafting Bone for ten years.

Ms. Ng knew her subject first hand: a Cantonese-speaking daughter of Chinese immigrants, she grew up in San Francisco’s Chinatown; her father was a merchant seaman, and her mother, a seamstress. A graduate of the University of California, Berkeley (B.A., 1978) and Columbia University (M.F.A., 1984), she worked as a waitress and occasionally as a lecturer at UC Santa Cruz and Berkeley in order to support her writing. In the early years of her career she had had some success in publishing stories, including “A Red Sweater,” which won a Pushcart Prize in 1987, and her talents had earned her a D. H. Lawrence Fellowship (1987), and Fellowships from Radcliffe College’s Mary Ingraham Bunting Institute (1988) and the NEA (1990). Her story collection, The First Dead Man and Others, received the San Francisco Foundation’s Joseph Henry Jackson Award (1988). She had also been a resident Fellow at the McDowell Colony, Yaddo, the Virginia Center for the Creative Arts, and the Djerassi Foundation.

In Bone, Ms. Ng went behind the curtain of the tourists’ Chinatown, capturing the saga of the last of the Old Bachelors—miners and railroad workers—who had established an inroad into America for new generations in spite of the Chinese Exclusion Act, which was enacted in 1882, repealed in 1943, and rectified in 1965. Ms. Ng has called it a brilliant piece of legislation because it was bloodless as it separated husbands and wives and disrupted the continuity of the Chinese American family. The Bachelor Society it created was devastating: in 1940 80 percent of the Chinese in this country were men. In Bone, Ms. Ng gave a father three daughters, a new generation caught between the Chinese traditions of their parents and the American culture that surrounds them, a conflict that drives one to suicide. Critics and readers alike considered the decade spent writing Bone time well spent. In her review of the novel for the New York Times (29 January 1999), Michiko Kakutani described Ms. Ng as “blessed with a poet’s gift for metaphor and a reporter’s eye for detail,” and lauded the “grace, authority and grit” of her writing. Bone was nominated for the PEN/Faulkner Award.

In the years that followed, her work on her second novel was supported by the Rome Prize of the American Academy of Arts and Letters (1998), the Lila Wallace Reader’s Digest Writers’ Award (1998), and a Lannan Foundation Completion grant (1999). Steer Toward Rock (Hyperion, 2008) focused on the McCarthyesque Chinese Confession Program, whose purpose was to seek out Chinese communists and also to flush out arriving or already landed Chinese who held derivative citizenships (a system devised to circumvent the Exclusion Laws). The narrator, Jack Moon Szeto, is a man who confesses; he chooses the hope of romantic love over the law. It won not only the American Book Award but consistently strong reviews. Beth Kephart described Steer Toward Rock in the Chicago Tribune (17 May 2008) as “relentlessly fierce and unstintingly lovely.” The novel had taken fifteen years to complete, but Ms. Kephart insisted that “those who privilege themselves by reading it through will not for one moment wonder why”: “Ng takes her time, says what she truly means, stares complication straight in the face, and stares it down. One feels her attacking this fiction-writing business as if it’s the most important chance any of us will ever get to put the truth on paper, and one is left—it can’t be helped—in awe of her talent.”

As a writer Ms. Ng feels the Exclusion Act taught her the importance of clarity and intent in each sentence. She claims the Confession Program taught her another invaluable lesson. “The program sent distrust like a plague through family and community so I learned that a true American must feel free to tell—not confess—one’s story.”

During her Guggenheim Fellowship term, Fae Myenne Ng will be continuing work on the third and last installment of her trilogy, tentatively titled Donatella, Getting Away With It.