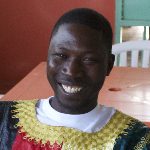 I was born and raised in Ziguinchor, one of the most multicultural towns in Senegal. I grew up with over ten ethnic groups from different religious backgrounds (Muslim, Christian, and followers of traditional African religions). Speaking several languages and celebrating together Christian, Muslim, and African traditional religious events were the norm in my neighborhood. My upbringing in this community where diversity and tolerance were the norms triggered my early interest in the study of languages, cultures, and religions in multilingual and multicultural African communities. After earning a high school degree from Lycée Djignabo of Ziguinchor in 1991, I attended Gaston Berger University of Saint-Louisian in northern Senegal from January 1991 to July 1996, where I earned a B.A. in English with an emphasis on grammar and linguistics. I attended the University of Montana where I earned an M.A. in French Linguistics (1996–1997), and the University of Illinois at Urbana-Champaign where I completed a Ph.D. in French Linguistics (1997–2002). I served as an Assistant Professor of French and Linguistics at Western Washington University (2002–2007) and was tenured and promoted to Associate Professor in fall 2007. I was hired by Boston University as a tenured Associate Professor of Anthropology and Director of the Title VI-funded African Language Program in spring 2008.

My current research interests lie in (1) the interactions between African languages and cultures and non-African languages and cultures, and (2) African primary sources written in non-Latin scripts, especially Ajami (African languages written with the modified Arabic script). My primary goal is to study these sources, from a multidisciplinary perspective, to uncover the insights they hold and to ensure that they are no longer treated as insignificant footnotes, but rather as major sources of local African knowledge. I have worked closely with colleagues from Senegal, Niger, Ethiopia, Tanzania, and South Africa and maintain enduring professional relationships with colleagues, scholars, private and public institutions in these African countries, as well as in Europe, and in the U.S. My work has appeared in The International Journal of the Sociology of Language, Journal of Multilingual and Multicultural Development, Language Variation and Change, African Studies Review, Journal of Arabic and Islamic Studies, The Studies in the Linguistic Sciences, The French Review, and the Revue Internationale de Langues, Littératures et Cultures, among others. I held a WARA postdoctoral fellowship and an ACLS/SSRC/NEH Area Studies Fellowship (2004–2005), and a Fulbright Scholar Fellowship (2007–2008).