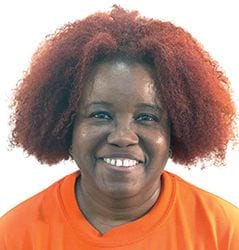 Multidisciplinary artist Fatimah Tuggar was born in Nigeria and raised there and in the United Kingdom. She has studied, lived, and worked in the US since the late 80’s. Her work uses technology as both medium and subject to serve as metaphors for power dynamics. She combines objects, images, and sounds from diverse cultures, geographies, and histories to comment on how media and technology diversely impacts local and global realities.

Tuggar’s art education covers three continents and a broader range of disciplines, traditions, processes, and materials. Her work has been the subject of various panels and articles. Her body of work has also been integrated as parts of academic curricula, in multiple disciplines and discussions, including technology, new media, politics, cultural studies, feminism, diaspora, globalisation, anthropology, social justice, sculpture, interactive media, photography, and video among others.

She has been a recipient of awards and commissions including fellowships from the Franklin Humanities Institute at Duke University and Civitella Ranieri, Umbertide, Umbria, Italy. She has produced commissioned works for Museum of Modern Art, New York; the Bronx Museum of the Arts; New York and Nordic Institute of Contemporary Art, Copenhagen, Denmark; and the Spencer Museum of Art in Lawrence, Kansas; among others. Tuggar has received many accolades including the 2003 Prix Special du Jury at Les Rencontres in Bamako, Mali; the Young with FIA Award in Caracas, Venezuela in 2002 and most recently the 2019 Charlotte Street Foundation Visual Arts Award in Kansas City.

She is currently working on her first Augmented Reality artwork commissioned by the Davis Museum at Wellesley College, which is entitled Deep Blue Wells. Deep Blue Wells combines clay forms, projections, textiles and AR-enabled interactivity to create encounters for the viewer-participant that highlight experiences of the present, the historical, and imaginary visualisations about the five-hundred-year-old tie dye wells in the city of Kano, Nigeria. The artwork will be included in a solo exhibition, Home’s Horizons curated by Amanda Gilvin, which opens in September 2019. Supported by two grants from The Andy Warhol Foundation for the Visual Arts, the exhibition will be accompanied by a monographic catalogue published by the Davis Museum and Hirmer Verlag.

Borrowing from the familiar language of advertisement, popular entertainment, and folklore, also drawing from the experiential, I investigate the cultural and social implications of technology. Technology is both a medium and a subject in my work. I use it as a metaphor for power dynamics to explore how media diversely impacts our realities. Assemblage, collage, and montage have long been central to my method of exploration and expression of ideas.

I employ assemblage when working with objects, by combining household tools from different cultures with their varying counterparts. I maintaining the functionality or utilitarianism of the object so as not to render it mute. This is a way to look into the implications of the juggling act that occurs as we adapt, modify and are modified by, the implements and power systems that define our environments.

In both my computer montages and video collages, I combine a variety of images to closely examine cultural nuances so that the actual meaning of the work exists primarily in between the elements I bring together. My concern is not to pass definitive judgements on the cultures involved, but to look in between the cultural products and structures as a way to better understand how media technology influences and affects the daily lives of people. I focus on the internal relationships of the individuals within the image, tempered by the surrounding power structures.

For example in the series Money & Matter” which is made up of nine images that examine the relationship of human beings to capital, on a personal level and from a social perspective. In this series, I use entertainment technologies as a vehicle for commentary on various and conflicting histories, journeys and materials in our experience. The symbols and expressions of money exist in relation to matter as both subject and object of what we desire and fear. The tension between the money’s power gaming and elements of distraction and the substance of what matters in peoples lives are at the core of this series. I for one know that I am unquestionably implicated in the dynamics of money & matter.

My web-based interactive work allows the viewer/participant to choose backgrounds and animated elements to create a collage. The provided backgrounds and elements facilitate the creation of temporary non-linear narratives that can be constructed or disrupted based on the choices made by the participant. Bringing together my own shots and sound recordings with found imagery and sounds, I produce icons, commodities and characterisations, that the participant can use to generate their ongoing personal conversations which allow the exploration of these shifting factors. The process of assembling locates the actual content of the work in an interaction that is in constant flux. Therefore, meaning mainly exists in between the elements that are brought together. This creates a space for combining personal perceptions with these set components to create ongoing conversations, which are in expansive change. This opens up additional areas for further dialogues that can be both fluid and or resistant.