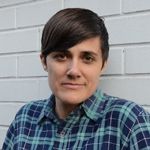 Faye Driscoll is a Bessie award–winning choreographer who has been called “a startlingly original talent” by the New York Times. She has choreographed four evening-length works with commissions from The Kitchen, The Wexner Center for the Arts, Dance Theater Workshop, American Dance Festival, and HERE Arts Center. Her work has been supported by a 2013 Creative Capital award, a 2013 Foundation for Contemporary Art grant, a 2013 NYSCA grant, a 2010–2013 National Dance Project NEFA production and touring award, 2012–2014 funding from the Jerome Foundation, 2008–2011 funding from the Greenwall Foundation, and a 2010 LMCC Fund for Creative Communities grant. Driscoll has received commissions from the Zenon Dance Company and Barnard College, was a 2011 Choreographic Fellow at the Maggie Allesee National Center for Choreography, and was an Artist-in-Residence at the Baryshnikov Arts Center. She has been awarded a 2013 Alumni New Works award from the Headlands Center for the Arts, where she was first an Artist-in-Residence in 2011. She has collaborated extensively with theater artists, including Young Jean Lee, Cynthia Hopkins, Taylor Mac, Jennifer Miller, and NTUSA. Her video work was exhibited in Younger than Jesus, a triennial at the New Museum. Driscoll has been an adjunct professor at Bard College and NYU’s Playwrights Horizon’s Theater School. Her work has toured to the Wexner Center for the Arts, the Fusebox Festival, UCLA, the ICA/Boston, and CounterPULSE, with upcoming tours to the American Dance Festival and The Yard.

I am a choreographer who strives to investigate new forms of theatrical experience aimed to provoke feeling, stimulate the senses, and activate the mind.  I am obsessed with the basic problem of being "somebody" in a world of other "somebodies," and in my work I attempt to pull apart this daily performance of self. I do this by enacting it in excess, blowing it up to the extreme in order to reveal its edges and create more space, more possibility for who we can be.  Drawing on familiar images and archetypal scenes—such as poses from classical art, or the physicality of people in extreme states, from torture to religious rapture—I seek to animate the tension between image and felt experience. Strutting drag queens morph into a mother bird protecting and feeding her baby, who become beasts in a battle with one another, who turn into two people pushed to the brink of their relationship. My intention is to open up a space between extremes—where there is uncertainty and ambiguity, where falsehoods and truths mix.  I often seduce the viewer with the representational so they might think, “I know what is happening, and who those people are,” then flip things on their head so that there is a loss of identity, and the viewer is left in the uncomfortable attempt to relocate themselves within that loss.  I create manically choreographed physical and aural scores from these scenes and images, making them tightly constructed and difficult to get through. Through this labor, I hope to allow for a kind of transformation of both the performer and the viewer—to liberate the id, the erotic, and the fantastical. I use my work to convey the world I want to create, while grappling with the difficulties of negotiating the one we live in.

Follow this link to view an excerpt of  Faye Driscoll’s "You’re Me."