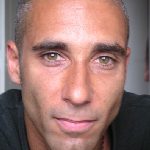 Fazal Sheikh is an artist who uses photographs to document people living in displaced and marginalized communities around the world. His principal medium is the portrait, although his work also encompasses personal narratives, found photographs, sound, and his own written texts. He works from the conviction that a portrait is, as far as possible, an act of mutual engagement, and only through a long-term commitment to a place and to a community can a meaningful series of photographs be made. His overall aim is to contribute to a wider understanding of these groups, to respect them as individuals and to counter the ignorance and prejudice that often attaches to them.

Fazal Ilahi Sheikh was born in 1965 in New York City. He graduated from Princeton University with a B.A. in 1987 and since then has worked as a photographer documenting the lives of individuals in displaced communities across East Africa, in Pakistan, Afghanistan, Brazil, Cuba, and India. The awards he has received for his work include a Fulbright Fellowship (1992), a National Endowment for the Arts Fellowship (1994), the Infinity Award from the International Center of Photography, New York (1995), the Leica Medal of Excellence (1995), Le Prix Dialogue de l’Humanité, Rencontres d’Arles (2003), the Henri Cartier-Bresson International Grand Prize (2005), and the Lucie Humanitarian Award (2009).

In 2005 he was named a MacArthur Fellow.

Sheikh’s work has been exhibited in galleries and museums around the world, including the Tate Modern, London, the Metropolitan Museum of Art, New York, the Henri Cartier-Bresson Foundation, Paris, and the Museum of Contemporary Art, Moscow. His work is held by many public collections, including the Corcoran Gallery of Art, Washington D.C., the International Center of Photography and the Metropolitan Museum of Art, New York City, the Fotomuseum Winterthur, Switzerland, and the San Francisco Museum of Art, California. He is represented by Pace/MacGill Gallery, New York City.

In 2001 he established a series of projects and books about international human-rights issues that would be published and distributed free of charge and made available online. These are published under the imprint of the International Human Rights Series (IHRS).

In 1994 Sheikh was named by The New York Times as one of thirty artists, thirty and under, most likely to change the culture for the next thirty years.