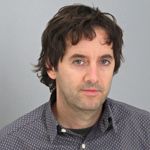 Federico Rubio was born in Montevideo, Uruguay, in 1966. He was educated in Uruguay (Facultad de Ciencias Económicas, Universidad de la República) and the U.K. (Post-Graduate Degree in Photojournalism, London College of Printing). He has worked as a photographer for a number of national magazines and newspapers, among them Posdata, of which he eventually became photo editor, and for which he produced several photo essays in the late nineties. For the past ten years, he has been an independent photographer, exhibiting his work in numerous solo and collective shows, in public and private venues and regional art fairs. His photographs are part of private collections in Uruguay, Argentina, Chile, U.S.A., England, and Spain. His latest exhibition, Botánica (Centro Municipal de Exposiciones, Montevideo, 2008), is part of an ongoing project that couples large-format analog capture with gelatin silver printing, thus celebrating historical rites of the medium in a time of huge technological transitions. In its first four-year instalment, the project has specifically dealt with natural forms in a studio environment. During the term of his Fellowship, Federico will further his exploration of the possibilities of the view camera, within a region where such an approach is relatively uncommon, and where it still has a considerable potential to fulfill. This project is being developed both in the studio and out in the field, and is expanding its areas of interest to adjacent territories, which include abstraction, portraiture, and the vernacular urbanscape of Uruguay’s interior.