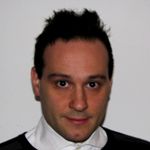 Federico Solmi was born in Bologna, Italy, in April 1973, and currently lives and works in New York. His exhibitions, which often combine articulate installations composed of different media such as video, drawings, mechanical sculptures, and paintings, use bright colors and a satirical aesthetic to portray a dystopian vision of our present-day society. Irreverent, surrealistic, and sexually explicit, the videos and the works by Federico Solmi are as he is: extravagant, rowdy, and ironic. They are satires about the evilness and the vices that affect contemporary society and mankind. The artist uses images culled from the video-game industry, pop culture, and the Internet, and collages them with a historical influence to produce original artworks about the seemingly disparate subject at hand. The universe that he likes to represent is the exaltation of a present that is crumbling apart. It is also a criticism of system that approves and trusts without questioning the fragile foundation on which our culture and post-modernist society is based.

As an untiring observer of the alienated scenery of the metropolitan reality, I am focusing in my works, to analyze the paradoxical and neurotic urban landscape and the colossal contradiction of contemporary society. These are the key themes on which my artistic search has been based.

The protagonists of my videos are always catapulted into the middle of an undecipherable reality. Typically they are all lost characters; confused inhabitants of a world in which are desperately seeking their role and their identity and forced to live inside a mad and hostile society without rules. This is a world that inexorably continues to regenerate and to renew itself, while at the same time is falling in front of our eyes. The universe that I like to represent is the exaltation of a present that is crumbling apart. It is also a criticism of a system that approves and trusts without questioning the fragile foundation on which our culture and post-modernist society is based.

I initiated my career in the United States, moving here from Italy in September 1999. Around the year 2002, I became heavily involved in the development of the Brooklyn art scenes of Williamsburg and D.U.M.B.O., where, a few years later, I took part in my first exhibitions in the local galleries. In the past five years, I have been entirely focused on developing drawing animated videos. Since I immediately felt very comfortable with this media, I began to construct very ambitious projects. All my video animation were made in collaboration with Russell Lowe, an Australia-based 3D artist and professor at the University of New South Wales University in Sidney.