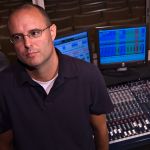 Fernando Benadon studied jazz at Berklee (BM 1996) and composition at UC Berkeley (PhD 2004). His music has been praised by the New York Times as “engagingly forward,” “a perfect curtain-raiser [of] ear-grabbing invention.” He is the recipient of numerous awards, including the League of Composers/ISCM composition prize, Copland House’s Aaron Copland Award, UC Berkeley’s Ladd Prize to study in Paris, and Tanglewood’s Paul Fromm Commission, as well as fellowships from Tanglewood, Aspen, the Wellesley Composers Conference, Fondation Royaumont, and the MacDowell Colony. Groups that have performed his works include the New York New Music Ensemble, Continuum Contemporary Music (Toronto), Continuum Ensemble (NY), Thelema Trio (Belgium), Quartetto Paul Klee (Venice), Towson New Music Ensemble, Empyrean Ensemble, New Millennium, Ensemble Green, Les Jeunes Solistes, and many others. His music for film has been featured at Cannes and at a dozen other major film festivals around the world. In 2009, his debut album, Intuitivo, was released on innova recordings.

As a scholar, he has published research on rhythm in leading peer-reviewed journals, including Perspectives of New Music, Music Theory Spectrum, Popular Music, and Ethnomusicology. Other recent achievements include the Society for Ethnomusicology’s Jaap Kunst Prize for the most significant publication of 2006, two fellowships from the Mannes Institute for Advanced Studies in Music Theory, and a paper presentation on speech rhythms at the Society for Mathematics and Computation in Music.

He currently serves on the tenure track faculty at American University in Washington, D.C.