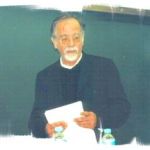 Born in Olinda, Brazil, Fernando Cardoso studied electrical engineering at the Universidade Federal de Pernambuco (UFPE), earning a B.S. degree in 1962. With support from the Conselho Nacional de Desenvolvimento Científico e Tecnológico (CNPq), he then continued his education at New York University’s Courant Institute of Mathematical Sciences, where he received both a master’s degree and Ph.D. in mathematics. His dissertation dealt with pseudo-differential operators, a topic that occupied him throughout his graduate studies and one which he continued to explore over the next decade in such articles as “A Boundary Value Problem for Psuedo-Differential Operators,” Anais da Academia Brasileira de Ciências, 44 (1973), and “Locally Solvable Pseudo-Differential Operators with Double Characteristics,” Functional Analysis (1976). It was also focus of his research during his Guggenheim Fellowship term, spent at the Institute for Advanced Study in Princeton, and resulted in his article (written with François Treves) “A necessary condition of local solvability for pseudo-differential equations with double characteristics,” which was published in Annales de l’Institut Fourier in 1973.

After receiving his Ph.D., Fernando Cardoso returned to Brazil to take up an appointment as Professor of Mathematics at UFPE, a position he still holds. His research interests over the years have included local solvability, the Cauchy problem, scattering theory, spectral theory, inverse problems, resonances, microlocal analysis, dispersive estimates for Schrodinger and for the wave theory and have produced scores of publications in international mathematical journals.

He has been a visiting professor at premier institutions around the world, including the Centre de Mathematiques, Ecole Polythecnique, and Université de Nantes, France; Libera Universita Degli Stadi di Trento, Italy; Bulgarian Academy of Science; Steklov Institute and Moscow State University, Russia; and Fachbereich Mathematik Technische Hochschule Darmstadt, Germany. In addition to Fellowships from the Guggenheim Foundation and CNPq, he has been a Fellow of the National Science Foundation and of the Consiglio Nazionale delle Ricerche, Italy.

Fernando Cardoso is currently the editor of Boletim da Sociedade Brasileira de Matemática and the International Journal of Applied Mathematics and Statistics, and has also edited ZDM, Mathematical Reviews, Communications in Partial Differential Equations, and the Journal of Differential Equations. His awards include a Commemorative Medal from CNPq and he is a Commander in Brazil’s National Order of Scientific Merit. He was elected a Member of the Brazilian Academy of Sciences in 1977.