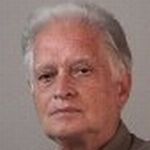 Francisco Kröpfl is a composer, teacher, and musical researcher. Born in Rumania, he was raised in Argentina and educated in Buenos Aires, first at the National Conservatory of Music (1944-47) and then at the Belgrano National College, where he received his Bachiller degree in 1948. From 1946 to 1952, he also studied composition with Juan Carlos Paz.

He became director of the Studio of Musical Phonology at the University of Buenos Aires in 1959, a position he held until 1973. During those years he was also an instructor in the Faculty of Architecture and Urbanism (1965-73) and an instructor and investigator in the Center for Advanced Studies in the Arts (1966). In addition, he was founding musical director of the Laboratory of Electronic Music at the National University of Buenos Aires’ Latin American Center of Higher Musical Studies (CLAEM) from 1969 to 1971, the first such lab in Latin America. From 1986 to 1997, he also taught at UNBA and was appointed to its Musical Morphology Studies Chair within the Philosophy School there. Beginning in 1998, he was musical director of the Government of Buenos Aires’ Recoleta Center (CCR), a position he held until 2006. During that time, he was instrumental in fostering the exchange program in computer music composition between CCR and Stanford University and UC San Diego.