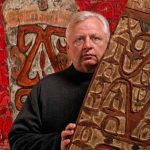 Rembrandt’s The Painter in His Studio, while providing a self-portrait of the great painter, wordlessly conveys a description of the creative process itself. The viewer is deprived access to the artist’s work-in-progress—and Rembrandt delivers the lesson. We are invited to speculate, not only on the subject of the artist’s painting, but also on the artist’s role as a conduit and filter for ideas and concepts, facts and visions. The physical painting is a portrait. What I find more compelling, however, is the promise of the painting Rembrandt conceals from us. The Painter in His Studio has always held meaning for me as the artist’s comment on the synergy between subject and artist—between the viewer and the viewed. “Studio” serves as a metaphor for what I see as the process and—just as importantly—the promise of a painted work.

As a 20th-, and now, 21st-century American artist, I continue to be inspired by Rembrandt’s example from 17th-century Europe. Though my world-view is informed by the massive cultural and artistic changes that have taken place since he lived, and our painting styles are radically different, my starting premise as a painter is this: That the painter, usually working alone and/or in collaboration, looks out at the world, filtering and processing references and ideas to transform paint and canvas into a lively discussion without words.

After almost forty years, my pleasure at my good fortune to be involved in the art’s great history has not diminished. The touch, the smell and the substance of paint are mingled with the possibilities—of fact, fantasy, philosophy, illusion; with the unique interaction between concepts and images.

For me the most exciting painting is the painting I haven’t yet made, those problems I haven’t yet solved. Making paintings is a difficult proposition and I know that one really never learns how to paint. For me, each painting is a mistake, asking a question that points toward the possibility of the next painting. What I want for my paintings is that painting on the other side of Rembrandt’s easel, the one that has not been revealed. Almost four centuries his painting still asks questions about painting and the future of painting. The painting unseen. I want that!

My current interest is the art and symbolism of the Asmat people, one of the last Stone Age societies remaining on Earth today. Near the turn of the 20th century, military expeditions did pass close to Asmat territory, but few ventured into the island’s interior, where the Asmat resided. Word spread that the Asmat tribal traditions included headhunting. Study of Asmat people and culture was not pursued in a scholarly way until after World War II, when Dutch settlement of New Guinea began in earnest. Today, as a consequence of its isolation, Asmat culture and art allow us to see a picture of human creativity and technique in a true primitive setting. For the past several years, I have been including the culture’s myths, symbolism, and striking motifs in my own paintings.

The tribal practices of the Asmat are closely tied to their creation myths. They deeply honor their ancestors, and much of their artistic practice evolves from these beliefs. Their work is invested with spirituality and respect, with references to the natural and supernatural world. This culture’s art offers me the ability to take on a new artistic language, which is honest, without pretension, and imbues reverence and spirituality into inanimate objects.

Woodcarvings, in particular, are an important part of their religious and spiritual tradition as they are the vestments, utensils, and emblems of the Asmat rituals. Like icons they communicate the history and ideas of the culture and are a tangible record of events, ideas, personal connections, structure, and belief systems. The carvings also transmit the culture’s own self-awareness, which is considered to be a vital and necessary attribute of civilized humankind. While the Asmat created no written language of their own (though the Dutch have created one for them from a trade language they use to communicate), Asmat woodcarvings communicate intellectual and spiritual ideas. In a sense, these carvings serve as a written language.

“According to Eibi-Eibesfeldt,¹ such simple pictorial images comprised of straight and undulating lines, circles and other symbols arranged in complex interconnected patterns can be regarded as an archaic form of writing.”²

The organic, mysterious, and transient nature of this art has intrigued and inspired me. I have had the opportunity to examine extensive collections of these artifacts at the ethnographic museum in Heidelberg and the Steve Chiaramonte collection in Salt Lake City. The opportunity to touch, smell, and see the scale of these pieces is as important to understanding the Asmats as is reading the printed word in Western culture. The more I have painted using Asmat imagery, the more important it has become to understand the significant motifs, not just by reading about them—learning their meanings, but also by touching them; by following the tracery of the woodcarver’s motifs and designs with my own hand through making rubbings on paper from artifacts in my own small collection.

Today, only 65 years after contact with the Western world, the culture of the Asmat people has already been significantly changed through their contact with the outside world, and the Asmat culture in its pre-contact form, before traders and missionaries, no longer exists. Sadly, much of the art created by the Asmats today does not reflect the culture’s original traditions. Interestingly, in its original, Asmat art is not intended to be of lasting value, but is intended to decompose, die—even disintegrate. Their material culture, once intended to be ephemeral, includes and preserves the Asmat motifs and symbolism before Western influence. As a result the museum collecting and scholarly study of their tribal artifacts and ritual practices may be the only things that will transmit future knowledge of their society.

With the inquiry, investigation and research of the Asmat, I found the impetus to invest in the possibilities of risk taking, experimentation, and even a bit of violation. In his sketchbook, Pierre Bonnard quotes Delacroix as saying “one can never paint violently enough.” In some cases, it is working toward not what we think painting should be but what it could be. The touch, sound, smell, and the substance of paint are mingled with the possibilities—of fact, fantasy, philosophy, and illusion, with the unique interaction between concepts and images. I am not interested in painting that is cynical about painting or painting that is merely an exercise in craft without idea. Many times, it is the experimentation with paint directed toward a purpose  that causes not only interesting visual engagement, but advances a concept as well.

For example, in the painting Safan III, paint is allowed to soak into and is used to saturate and secure the paper Asmat shield rubbings to the painting. The text, ‘Asmat,’ is cast in gel on plastic separately and then organized on the surface after it dries. In this case, a word becomes an element, a shape which has a tactile surface, can be picked up as an object, walked through space and invested into the space of the painting. Its transparent physicality on the surface of the painting allows the viewer to see underlying color while interrupting future applications of paint. Working on my paintings, the paint has sometimes been soaked, poured, printed, ground, puddled, cast, foamed, collaged, transferred, scraped, glazed or whatever it takes to make the painting believable. After forty years of painting, my pleasure and my good fortune to be involved in the art’s great history has not diminished.

I have also been investigating the use of new technologies as a tool to produce material and images for the paintings. Using collages made from photocopies of motifs found on an Asmat shield, I have deconstructed the image as it was originally organized on the shield and reorganized it into new compositions. These collages were then scanned, cleaned up, edges smoothed, and programmed for the laser cutter in the Prototyping Lab at the College of Design, Architecture, Art and Design at the University of Cincinnati. The compositions were laser-cut from a heavy twill fabric so they could be painted and collaged into the paintings. This brings some of the physicality that one finds in the Asmat shields to the process of painting. These additions challenge, interrupt, and inform the process of painting. This addition of laser-cut twill plus the incorporation of an Asmat shield rubbing was used in the painting Monument and Asmat Clouds and Pile and Forms. The compositions were also cut from acrylic sheets and thin plywood to be used as stencils so that the cut-out compositions could be drawn and redrawn in layers as seen in the painting Asmat Clouds-1. What seems significant for me in this is the idea of archaic motifs meeting digital technology in the pursuit of painting.

I am eager to explore ways to incorporate Asmat culture and art into my work until this urge has been exhausted and new possibilities have presented themselves. I have been lucky throughout my engagement with painting to have ideas evolve, resources, concepts and new directions present themselves—just when I think I have run the work aground.