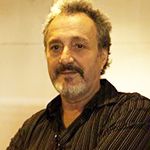 Fred Valentine is an artist with a strong focus in painting and drawing. He enjoys and appreciates the invention, challenge, and discovery of making art in the hopes that this translates into a similar experience for his viewer. He moved to New York City in 1984 from Chicago after accepting a position as art teacher/therapist with an agency that serviced a population of children and adults with a wide range of psychiatric and developmental issues. He worked closely with the psychologists and social workers to address the needs of each individual. With combined years in Chicago and New York he continued this practice for more than thirty years. With this population in mind he created and developed adaptive ways for them to approach making art. He would often return with these methods back to the studio as part of his own studio practice. The importance and relevance of this give and take cannot be overestimated in his artistic development. In the early 1990s he became part of a group of artists, activists, and organizers of guerrilla theater performance, happenings, and art exhibits in Williamsburg, Brooklyn. and Europe. Cats Head in Dublin, Ireland, was a multimedia spectacular that featured seventy-five artists from around the world. Cats Head Dublin spurred him and five others to form “Mustard” in Williamsburg in early 1993. Mustard was a multimedia space that featured spectacular events, with visual and sound performance often going on simultaneously. What it became was a combination of Bacchanalia, anarchy, social club, and creative space. After Mustard caught fire and closed, he soon joined forces with a partner from Mustard to create an art and performance space on North 6th Street in Williamsburg. The thought was to create a sensual and beautiful alternative to the typical art venue. Bringing in veteran and well-respected artists to do what they wished in a 2,000 square foot exhibition space brought much deserved attention to the lesser-known and overlooked artists that were his primary focus. The result was exhilarating and something quite new and for a while it was fertile ground for creativity and experimentation. When creative differences resulted in a parting of the ways, he kept a low profile for a few years while maintaining a healthy and vibrant studio practice and focus on his family. He now sees this time as the seedling of the current direction in his work. In the spring of 2011 he divided his studio and opened a gallery called Valentine. Valentine exhibits eight to nine shows a season with a combination of veteran, overlooked, and emerging artists often showing simultaneously. His goal is to create a venue devoid of the rigmarole of the traditional gallery system to give as many deserving artists as possible opportunites for unhindered creativity. Fred Valentine has a B.F.A. from the Columbus College of Art and Design and an M.F.A. from the School of the Art Institute of Chicago. His work has been reviewed and featured in the New York Times, Bomb Magazine, Time Out NY, and other publications. He received a grant from the Pollack Krasner Foundation and was awarded a residency at Yaddo. He was recently included in Brooklyn Magazine's list of the 100 most influential people in Brooklyn culture. Profile photograph by Hyperallergic Follow this link to view "Fred Valentine: Behind the Scenes," from BOMB  magazine.