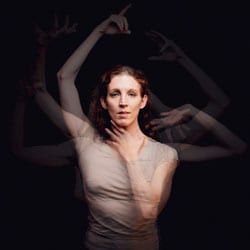 Gabrielle Lamb is a New York City-based choreographer and Artistic Director of Pigeonwing Dance, described by The New Yorker as "eccentric,...playful...curious." Her choreography has been presented by the Royal Winnipeg Ballet, Whim W' (Seattle), Ballet Collective (NYC), Ballet Austin, Ballet Memphis, and the Sacramento, Milwaukee, and Kansas City Ballets. A 2014 Princess Grace Fellow, she has also won choreographic competitions at Hubbard Street Dance Chicago and Milwaukee Ballet, as well as the Banff Centre' Lee Award and a NY City Center Choreography Fellowship. In 2018 she was Grand Prize Winner of the S&R Foundation' Washington Award. In 2018 and 2019 she was selected to create for the American Ballet Theatre Choreographic Incubator. A native of Savannah, GA, she trained at the Boston Ballet School and was a longtime soloist at Les Grands Ballets Canadiens.  In 2009 she was invited by Christopher Wheeldon to join his company Morphoses in NYC. Her performing repertoire included new creations by Mauro Bigonzetti, Pontus Lidberg, and Shen Wei, as well as leading roles in works by Naharin, Balanchine, Kylian, and Duato. She was described by DANCE Magazine as “a dancer of stunning clarity who illuminates the smallest details—qualities she brings to the dances she makes, too." Vimeo Photo Credit: Charles Roussel