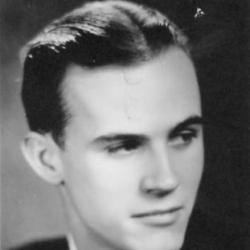 normal;”>Slow Movement for String Quartet, at the Composers-Forum-Laboratory, 1939; Scherzo for Large Orchestra, by the Chicago Symphony Orchestra, Frederick Stock conducting, 1941; Concerto for Violin and Orchestra (No. 2), by Jascha Heifetz, season, 1942–43; <i style="mso-bidi-font-style:

normal;”>Paratroops, orchestra suite from the motion picture score, performed by the NBC Symphony for broadcasting, 1943, at the National Art Gallery, 1943, by the Janssen Symphony, Werner Janssen conducting, 1943; Fantasy, for chamber orchestra, by the Rochester Symphony Orchestra, Howard Hanson conducting, 1943; A War-time Litany, for men’s chorus, brass and percussion, by the Army Music School, Fort Myer, Virginia, 1944.

normal;”>Whoopee Ti-Yi-Yo, commissioned by CBS and broadcast by CBS Symphony, on Columbia School of the Air program, 1941; <i style="mso-bidi-font-style:

Publications of Music:  <i style="mso-bidi-font-style: