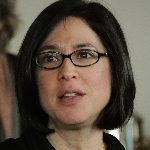 Gayle Wald is Professor and Chair of English at George Washington University, where she teaches African American literature and U.S. popular music culture. She received her B.A. in English and French from the University of Virginia (1987) and her Ph.D. in English from Princeton University (1995), where she benefited from a lively intellectual community of African American Studies scholars.

Prof. Wald’s research interests include the relationship between popular culture and social movements, cultural history, and issues of cultural memory and “forgetting.” Recurring themes in her work include the fluidity of categories that lend the social order its (sometimes oppressive) “coherence,” and the authenticity of the cultural practices of socially subordinated groups. Her current project, “It’s Been Beautiful”: SOUL! and Black Power Television, traces the history and impact of the groundbreaking public TV show (1968–1973), which brought a radical sensibility to a network better known for programs like Civilisation and Great Performances. An extraordinarily rich archive of African American cultural production of the period, SOUL! sheds light on the power of popular performance as pedagogy and as pleasure. Funded by grants from the federal government and the Ford Foundation SOUL! is additionally a portal into the intersections of public arts culture and public policy in the wake of 1968.

Prof. Wald is author of two previous books: Crossing the Line: Racial Passing in 20th-Century U.S. Literature and Culture (Duke University Press, 2000) and Shout, Sister, Shout! The Untold Story of Rock-and-Roll Trailblazer Sister Rosetta Tharpe (Beacon Press, 2007), the latter of which was a New York Times Book Review Editor’s Choice book in March 2007. She is also the author of numerous articles on popular culture, on topics ranging from the film Clueless to gendered performance among boy bands of the 1990s.