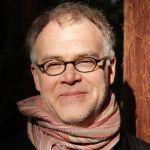 Gene Coleman is a composer, musician and director. He is the recipient of the 2013 Berlin Prize in Music Composition from The American Academy in Berlin. Since 2001 his work has focused on global culture and music's relationship with architecture, video and dance. He studied at the School of the Art Institute of Chicago with experimental filmmakers Stan Brakhage and Ernie Gehr, and music with Robert Snyder. He was the William Penn Foundation composer in residence at the American Academy in Rome (Fall 2011) and has been composer in residence at Shofuso House (Philadelphia 2009), Westwerk (Hamburg, 2007), Taipei Artists Village (Fall 2007), Irtijal Festival (Beirut, 2005), Haus der Kulturen der Welt Berlin (2003-2004), Takefu Music Festival (Japan, 2002) and in Tokyo (2001 Japan-US Fellowship). Over the years he has collaborated with a wide range of musicians and composers; from Jim O'Rourke and Otomo Yoshihide to Helmut Lachenmann and George Crumb. Many groups have commissioned his music and film work and presented it around the world, including Ensemble N_JP, Klangforum Wien, The Japan Society New York, The Ernst von Siemens Foundation, Chamber Music America, Network for New Music, The Graham Foundation, I-House Philadelphia, Tom Buckner, Phace Ensemble, The Museum of Modern Art, The Crossing, Maerzmusik Festival, Warsaw Autumn Festival and others. Profile photograph by Nick Lerman Gene Coleman on Vimeo Audio Samples