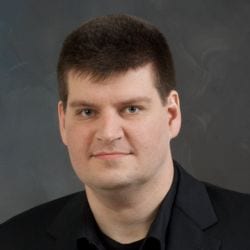 Georg Essl is Research Professor in the Department of Mathematical Sciences at the University of Wisconsin - Milwaukee. He is both a trained computer scientist with a Ph.D. from Princeton University (2002), as well as a classically trained musician.

These disciplines, along with mathematics, physics, psychology, and gender studies, inform his research on musical sound in general, and the physics of musical instruments and wave phenomena in particular. Areas of focus include the mathematical structure of wave propagation, and the audible qualities of chaotic oscillators.

Essl also seeks to enhance our understanding of new interfaces for musical expression, especially the use of mobile devices for new music performance. He is the designer of the mobile music environment urMus and was one of the founding creators and directors of mobile music ensembles in the United States and Germany, including the Michigan Mobile Phone Ensemble at the University of Michigan, where he taught from 2009-2016. Previous positions include terms at the Technical University of Berlin, MIT Media Lab Europe in Dublin, and the University of Florida.